You may have heard of cortisol before – it’s the body’s ‘stress hormone’.

When we are subject to physical (e.g. exercise, injury, temperature extremes) or psychological (e.g. stressful life events) stressors, our bodies release cortisol as part of our stress or ‘fight-or-flight’ response.

Like testosterone, estrogen and aldosterone, cortisol is an example of a steroid hormone. It is derived from cholesterol and acts on steroid receptors deep within cells.

We can further classify cortisol as a glucocorticoid hormone. What are the functions of cortisol?

In times of physical or psychological stress, we need to ensure our brain, muscles and other tissues have an adequate supply of glucose for energy.

For example, if we encountered a dangerous animal, our brain requires glucose to remain vigilant of the threat. Similarly, our skeletal muscles may need an immediate supply of glucose to fend off the animal (a ‘fight response’) or to help us run away (a ‘flight response),

In this respect, one of cortisol’s principal functions is to stimulate the production of glucose by the liver, thereby increasing blood glucose levels and maintaining a rich energy supply for tissues.

Cortisol stimulates a process called gluconeogenesis – the production of glucose in the liver from the breakdown products of protein and fat.

When cortisol is released, it stimulates the breakdown of protein in muscle. This causes a release of amino acids (the building blocks of protein), which are then converted by the liver into glucose. This newly produced glucose is subsequently released into the bloodstream to supply various tissues.

Cortisol also acts on fat stores in adipose tissue where it enhances the breakdown of triglycerides into fatty acids and glycerol. These fat metabolites are also converted into glucose in the liver and released into the bloodstream.

As part of a short-term (acute) stress response, cortisol moderately suppresses the immune system and limits inflammation. This may be beneficial, as it prevents the body from wasting energy on an excessive inflammatory response.

When cortisol binds to the glucocorticoid receptor (GR) inside immune cells, the receptor moves to the nucleus and alters the way in which genes are made into proteins (a process called gene expression). More specifically, the glucocorticoid receptor switches off the production of pro-inflammatory molecules (cytokines) e.g. IL-1, TNF-a but enhances the production of anti-inflammatory cytokines e.g. IL-10.

There are several mechanisms by which it does this. It may sensitize blood vessels to the effects of vasoconstrictor molecules such as noradrenaline. Cortisol also weakly mimics the hormone aldosterone. It therefore stimulates the reabsorption of sodium and water by the kidneys, which increases blood volume and blood pressure. 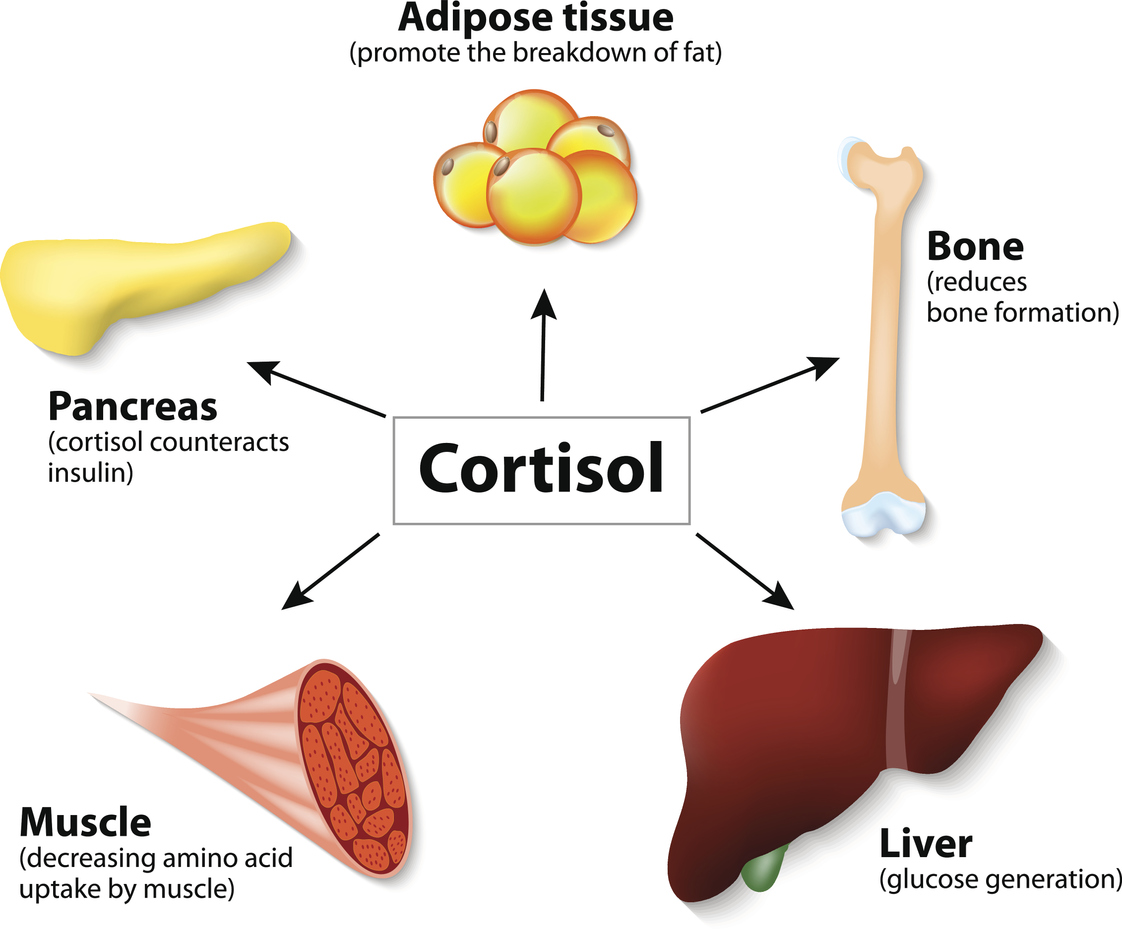 Where is cortisol produced?

Cortisol is produced by the adrenal glands.

Your adrenal glands, which also produce other hormones, including adrenaline and aldosterone, are key glands located just above your kidneys.

Like other hormone systems, production of cortisol is regulated by two key structures in the brain: the hypothalamus and the pituitary gland (sometimes called the ‘master gland.’).

When exposed to a stressor, your hypothalamus releases a hormone called corticotrophin-releasing hormone (CRH). This then acts on your pituitary gland, which secretes another hormone: adrenocorticotropic hormone (ACTH). ACTH travels down the bloodstream to the adrenal glands, where it stimulates the production of cortisol.

This communication network between the hypothalamus, pituitary and adrenal glands is also called the HPA (hypothalamic–pituitary–adrenal) axis. The activity of your HPA axis influences how much cortisol you produce in response to stressful events, including exercise. 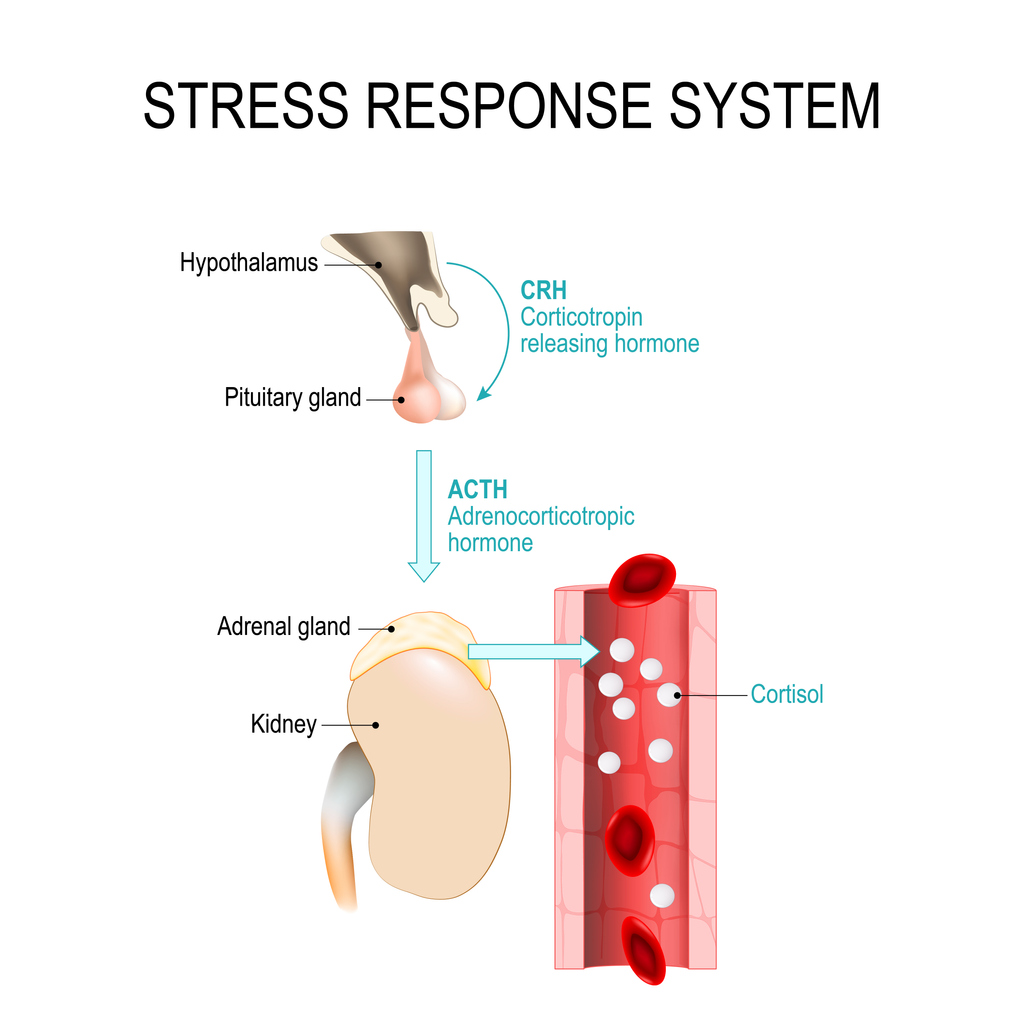 How is cortisol produced?

Cortisol is produced from cholesterol – a fat-like substance produced by the liver and also found in certain foods. A healthy amount of cholesterol in the diet is therefore needed to produce cortisol.

The biochemical pathways that convert cholesterol into cortisol are also those involved in the production of sex steroid hormones (e.g. testosterone and estrogen) and aldosterone (a hormone that regulates your fluid balance). 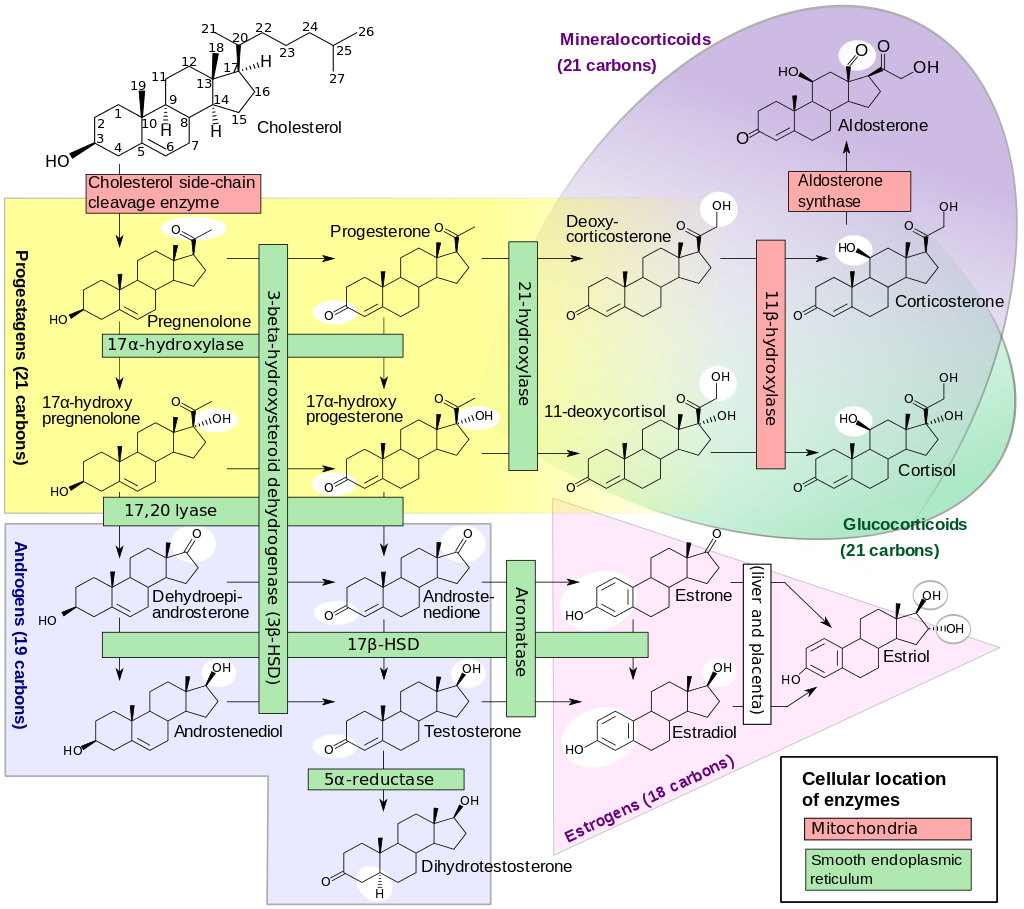 Cortisol and your circadian rhythm

Levels of cortisol in the blood vary throughout the day according to a 24-hour biological cycle or “circadian rhythm”.

Typically, cortisol levels are highest when we wake up, first thing in the morning. They then decrease during the remainder of the day, reaching their lowest point at nighttime. We call this pattern of hormone release diurnal variation.

The exact relationship between cortisol and the time of day also depends on your internal biological clock. This, in turn, is influenced by your genetic make-up, including genes such as your CLOCK gene. 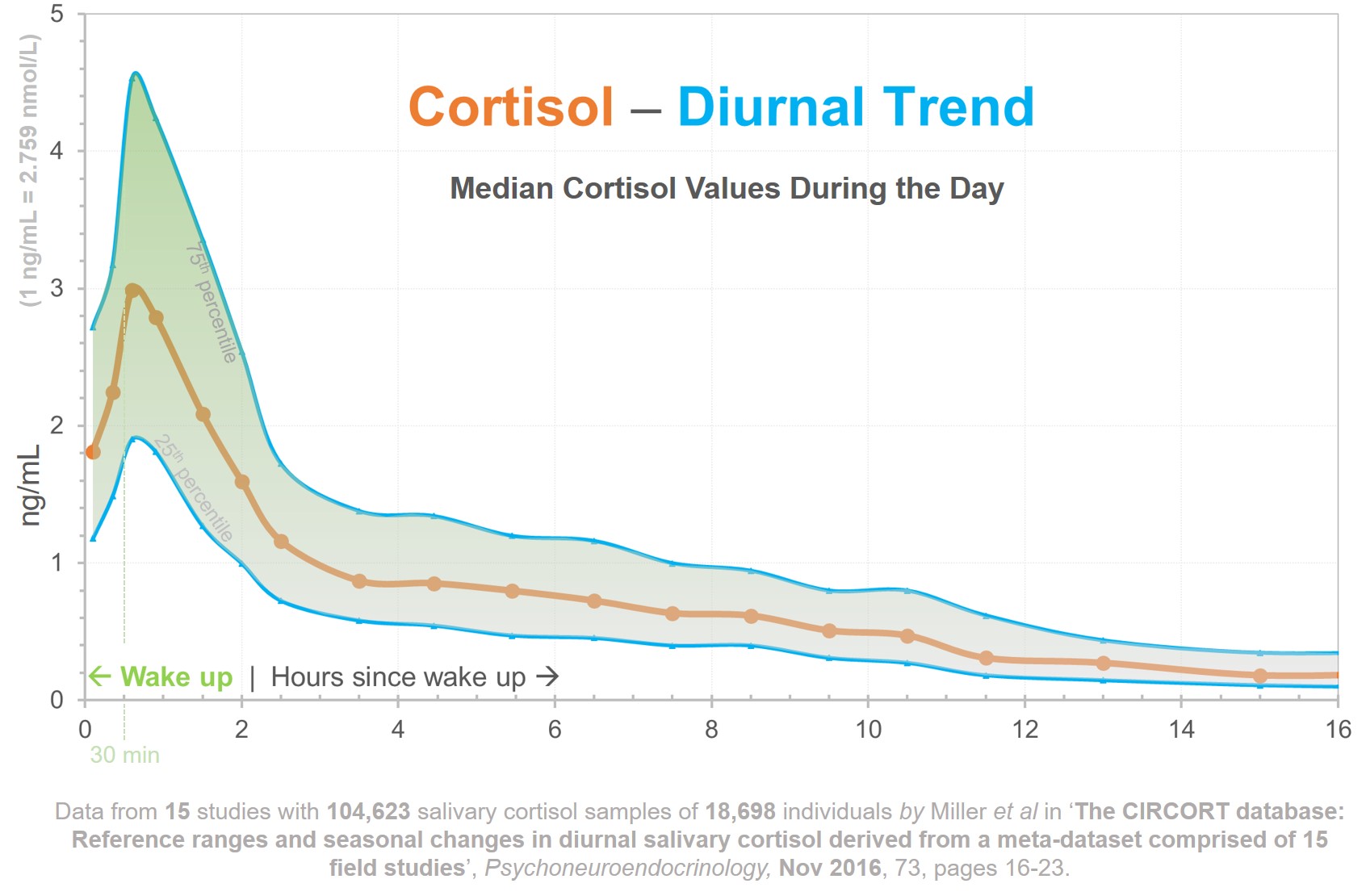 The relationship between cortisol and exercise is complex.

There are good reasons for this. As mentioned earlier, cortisol helps to increase levels of blood glucose, which can then be used to supply exercising muscles.

After exercise, cortisol levels typically return to baseline. Nevertheless, adequate recovery between training sessions is required to ensure that cortisol levels are not chronically elevated over time.

In the short term, the amount of cortisol released in response to exercise depends on several factors, including:

Exercise at above 60% of VO2 max (maximum rate of oxygen consumption) leads to significant increases in cortisol.

By contrast, research shows that low intensity exercise at lower than 40% of VO2max, produces very minimal increases in cortisol.

The same is true of resistance training, with heavy training volumes linked to larger increases in cortisol.

Research suggests that training sessions longer than 90 - 120 minutes cause more significant rises in cortisol. In line with this, some studies have found endurance athletes to be at greater risk of chronically high cortisol levels (with inadequate recovery in between sessions).

This phenomenon likely results from adaptations to the HPA axis in response to regular exercise. On a related note, people who exercise regularly (at a healthy training volume) are shown to be at a lower risk of high cortisol levels and experience less stress.

As cortisol levels obey a circadian rhythm and fluctuate over a 24-hour cycle, the time of day at which you exercise influences your cortisol levels.

Generally speaking, cortisol levels are at their highest first thing in the morning on waking. Intense or long-duration exercise in the morning can therefore lead to higher levels of cortisol.

Bear in mind that the precise relationship of cortisol levels to time of day varies from person to person, dependent on your internal biological clock.

What are the effects of high cortisol levels / sensitivity in the long term?

Cortisol is beneficial as part of a short-term response to physical or psychological stress.

The issue arises, however, when levels of cortisol are elevated for long periods or, similarly, we are excessively sensitive to the effects of cortisol in the long term. This may occur if we undergoing excessive exercise training volumes without sufficient recovery.

As cortisol is a catabolic hormone (i.e. it breaks down tissue), prolonged exposure to high levels of cortisol can lead to the breakdown of muscle tissue. This can negatively impact muscle gains and exercise performance.

As cortisol suppresses the immune system, raised cortisol in the long-term can make you more susceptible to infections. This is one reason why we are more likely to catch a cold when exposed to chronic stress.

In general, the following may be symptoms of excessively high cortisol levels / sensitivity:

[Note: we are not referring to pathologically high levels of cortisol (e.g. Cushing’s disease, Cushing’s syndrome). FitnessGenes do not directly test blood or salivary levels of cortisol, nor do we diagnose medical conditions. If you are concerned about your cortisol levels, you are advised to consult a physician].

What are the effects of low cortisol levels / sensitivity in the long term?

Other effects of low cortisol may include:

[Note: we are not referring to pathologically low levels of cortisol (e.g. Addison’s disease). FitnessGenes do not directly test blood or salivary levels of cortisol, nor do we diagnose medical conditions. If you are concerned about your cortisol levels, you are advised to consult a physician].

As mentioned earlier, cortisol exerts its effects in the body by binding to special receptors inside cells, called glucocorticoid receptors (GRs).

Variation in the genes encoding these receptors can affect both the function and quantity of glucocorticoid receptors. In turn, this influences how sensitive you are to cortisol.

In this respect, variations of your NR3C1 gene, which encodes a type of glucocorticoid receptor, impact your cortisol sensitivity.

Genes encoding the enzymes involved in the synthesis and signalling of cortisol are also important and accounted for by our TrueTrait algorithm.

Your exposure to physical and psychological stress, which triggers cortisol release, is obviously heavily dependent on your lifestyle. We may not be able to completely avoid stressful situations at the workplace, at home, in relationships etc., but there are other, perhaps more controllable, lifestyle factors that strongly influence our stress response and cortisol levels.

Skipping meals signals to our HPA axis that we are undergoing starvation (a form of physical stress), which then triggers the release of cortisol.

Specific nutrients in our diet also affect our production and response to cortisol. For more information, check out your Actions on TrueFeed.

Caffeine has been shown to stimulate the secretion of cortisol. Drinking caffeine while undergoing acute stress may also prolong your cortisol stress response. Tim Ferriss, the Man Who Put His Money Behind Psychedelic Medicine